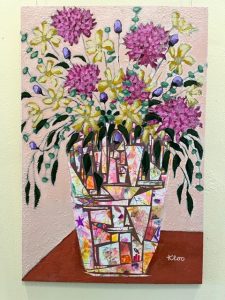 Her “Brave Enough Florals” will be on display throughout August and September with an opening reception hosted at the Rotunda Gallery in the Jackson County Public Library on Tuesday, September 27th, 2022 from 5:30 pm-7 pm.

Inspired by the natural beauty and wonder of life, Kloo’s compositions incorporate nuanced details, textures, and patterns. With an eye towards vivid colors and hues, Kloo’s art ignites a bit of whimsy and imagination, which has garnered her a devoted following of collectors.

The current series on display, titled “The Brave Enough Florals”, represents the most current body of work by Kloo. The series is a floral and vase study merging acrylic abstract impressionism and mixed media collage techniques. The series is over a year in the making, representing the artist’s transition through early motherhood, a pandemic, and career aspirations. Meant to be enjoyed both in the near and far perspectives, the floral series tells a story of a little bit of bravery, optimism, and hope.

Learn more about Kloo and her work at kloohansen.com.

If you would like to be our next Rotunda Gallery Artist, you can learn more and apply here

Jackson County Arts Council is a non-profit organization that provides programs and services to promote individual artists, foster appreciation of the arts, provide art education and inspire creativity in the mountains of Jackson County, North Carolina.